Preservation and restoration efforts for the monuments and buildings at Wyuka are a principal focus of the Foundation. Preserving the beautiful landscape, the streets, and the other historic elements of Wyuka Cemetery will assure that future generations of Nebraskans and visitors from throughout the country can enjoy this unique property. Wyuka Cemetery is listed on the National Registrar of Historic Places and is a Nebraska State Arboretum Historic Landscape.

Wyuka Cemetery was authorized by Nebraska law in 1869 and is a public charitable corporation managed by five Trustees appointed by the Nebraska governor. The Historical Foundation encourages the community to enjoy the grounds as a place for walking and enjoying nature. The Stables, Rudge Chapel and the Garden Room are used for weddings, concerts, and community meetings as well as memorial services. 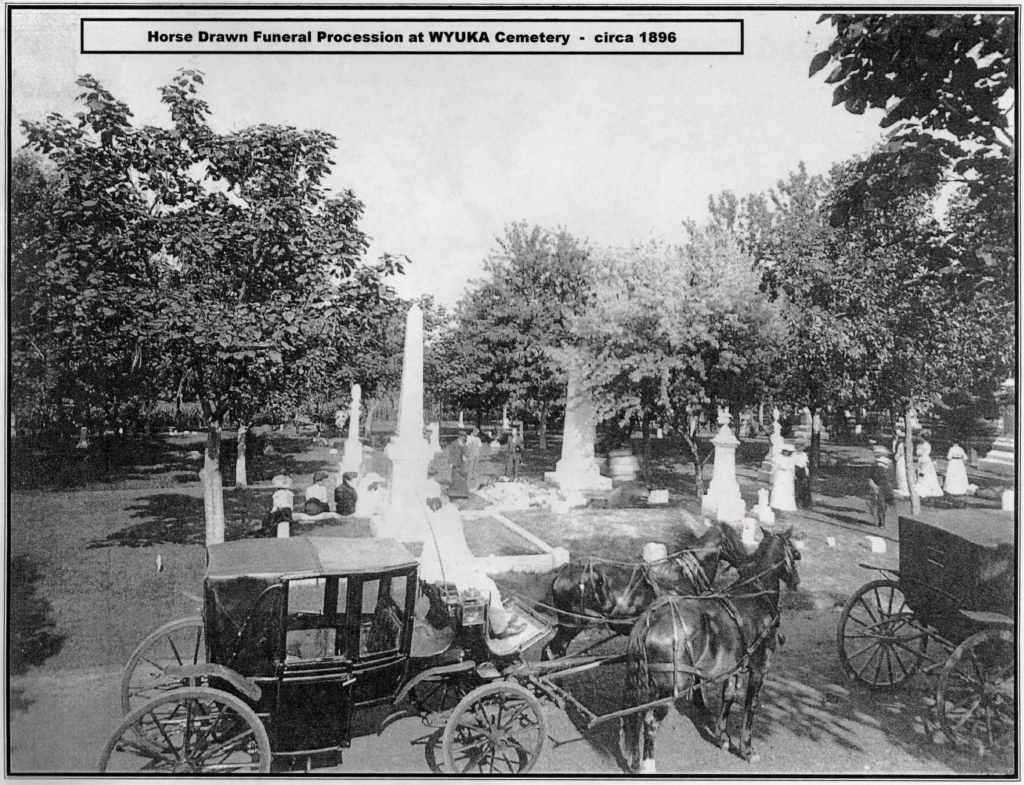 (The following is an article from the Lincoln Evening Star,  Friday Evening, September 10, 1909)

His passing will bring twinge of regret to hundreds in Lincoln

Died—Thursday afternoon, at Wyuka cemetery, at the age of 31 years, Charley, the old black horse which had done service at the burial ground since 1884. Funeral 4 P.m.

This death notice will bring a twinge of sadness to the hearts of many an old Lincoln resident, for “Charley” was beloved by thousands of citizens who had known him for twenty-five years and stopped him time and time again on the sfreet to admire his strength, gentleness and intelligence. His passing closes a long career of usefulness and, it is believed, establishes a record for equine longevity in Nebraska.

Charley was a beautiful big black, purchased by the Wyuka cemetery board in 1884 when he was 5 years old. He was bought through the late Granville Ensign from the state prison and for years was the only horse owned and worked by the cemetery association. Charley was called upon to perform a multitude of duties and during this period became well known to Lincoln residents. Whenever he made a trip to town people stopped on the steet and said: “There goes old Charley, the cemetery horse.” He was a prominent character in the old days of Lincoln and was admired for his glossy coat, for his size and strength and for his disposition, being as gentle as the proverbial kitten. Charley stood 15 hands high and weighed 1,700 pounds.

A year ago the old horse became too infirm to work but the cemetery board never for a moment considered killing or disposing of him. It was decided to pension him. He was given a roomy stall to himself and provided with the best of food. Regularly he was taken out for exercise and at times was permitted to roam about in an enclosure. He never lost his good disposition and seemed always to know and show affection for the old hands at the cemetery.

Recently, however, Charley became decrepit. He was so stiff he couldn’t lie down so would go to sleep standing up in his stall. Then he would fall down and it would take five men to get him to his feet. The cemetery employees held him in high regard, however, and never objected to raising him and making his as comfortable as possible.

But horseflesh, like human flesh, is but clay and must ultimately return to its own. Thursday morning the workmen found old Charley down again and their greatest efforts could not get him to his feet. He lay in a stupor all day and finally passed peacefully away late in the afternoon.